David Petraeus, former Director of the CIA and Commander, US Forces – Afghanistan, was questioned about US politics and international affairs in front of a capacity crowd at JW3 in Hampstead on Tuesday December 11, by William Shawcross, the writer and influential foreign affairs commentator.

David Petraeus – once lionised as the Douglas MacArthur of his generation – received plaudits for his 37 years in the US military. Shawcross wondered whether Petraeus, whose father fled the Nazis to immigrate to the US, believes “America is still the beacon that it was in the Forties, Fifties and Sixties? People say it’s tarnished now.” Petraeus responded that as a non-resident senior fellow at Harvard, he was currently involved in examining why America’s current foreign policy is neither coherent nor comprehensive.

Crucially, he declared, “If you’re going to do what it appears the administration is doing…declaring a new Cold War against China…then you need all the other possible countries to be with you as your allies.”

“America is still the beacon that it was in the Forties, Fifties and Sixties? People say it’s tarnished now.”

However, Petraeus observed that while President Trump is criticising many NATO countries for failing to spend enough, the US military budget is increasing considerably. More troops are deployed along the Polish border and US fighters are posted in the Baltics; meaning that the US is boosting NATO more than it has in recent years – in counterpoint to Trump’s hostile rhetoric

On China, Petraeus acknowledged its rapidly rising military capabilities, but pointed out “it’s very very complicated’ because unlike in the Cold War with Russia, China and the US are number one trading partners. But he downplayed expectations that China will become more democratic as it gets wealthier. ‘Their middle class is now larger than the entire US population’ and this is doing nothing to make them more ‘like us.”

Turning to Saudi Arabia and the Kashoggi murder, Petraeus said that there could be consequences such as a temporary cessation of arms sales.  But he also declared: “It’s accurate to describe Saudi Arabia as the keystone not just of the Gulf States but of a broader area of the Middle East. They have literally kept the lights on in Cairo at certain times.” Though America has astonishingly become the world’s number one oil producer through fracking, “it is still a vital national interest of the US to have a freeflow of energy resources through the Gulf.” Saudi Arabia is the country where “we least want to see extremists gain a foothold.”

“It’s accurate to describe Saudi Arabia as the keystone not just of the Gulf States but of a broader area of the Middle East.”

Asked more broadly about Islamist extremism, Petraeus  replied that there were five key lessons: “One – ungoverned places in the Muslim world will be exploited by extremists…Two – You must do something about it…Three – You probably have to have the US lead because their capabilities so far outstrip all the others…but you still want a coalition and you very much want Muslim countries in that coalition…Four – You cannot counter terrorists with just counter-terrorist forces (reconciliation and restoration of basic services is needed) …Five – This is a generational struggle.”

Pushed on how he might advise Israel on its future security, he emphasised that the way forward with the Palestinians would be through small sustainable initiatives, including educational projects on the West Bank that could help boost the economy. Ultimately, Petraeus sees no alternative to the two-state solution, so advised Israel to “try to avoid creating obstacles that will make it more challenging to achieve.”

He concluded with an interesting prediction that Iran, despite Trump’s hostility, might want to come back to the negotiating table late next year. “They’re going to test what the will is in the US, and I think the will is quite firm. I don’t think they’re going to want to test this president having seen him take action twice in Syria in the wake of chemical attacks.” 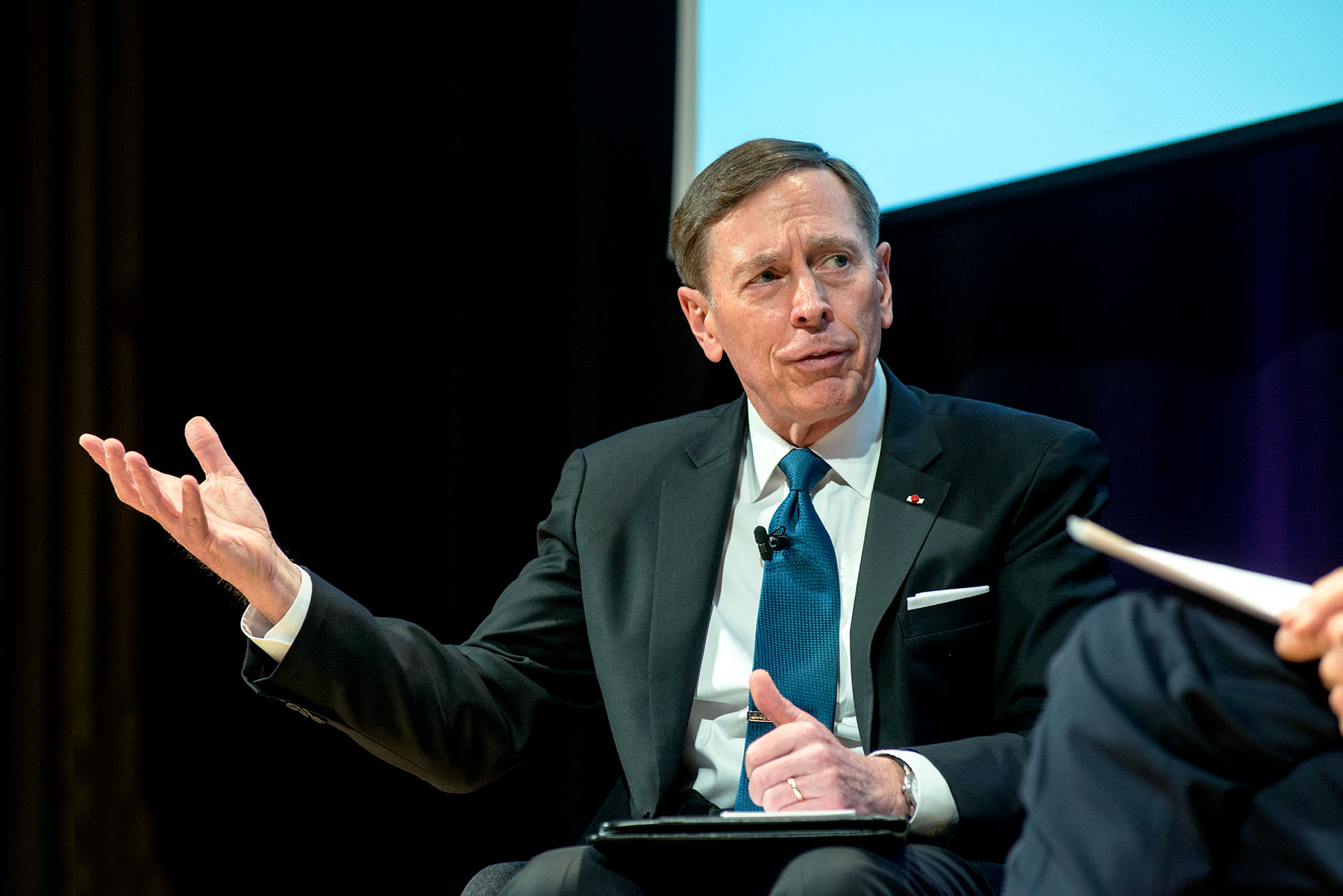 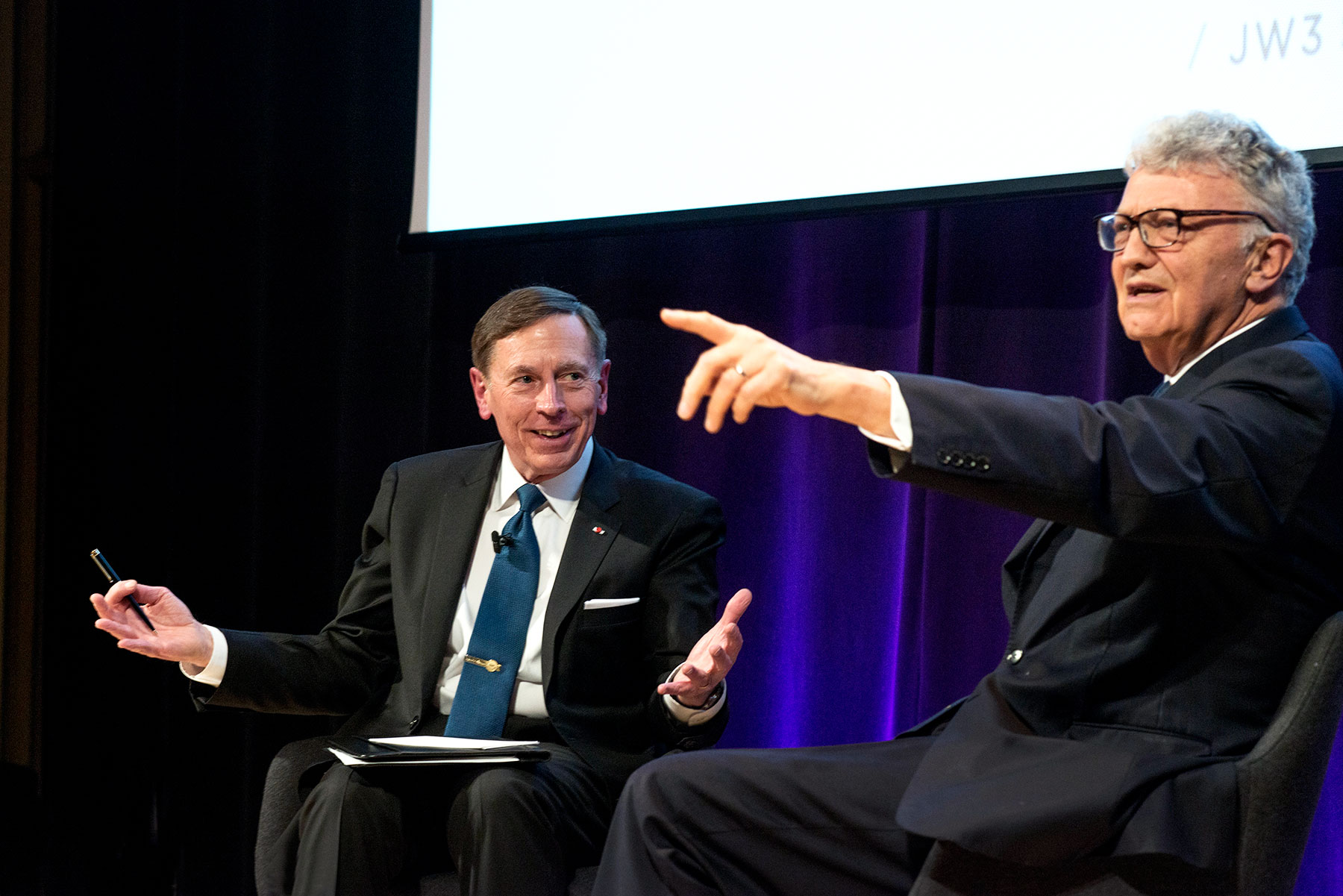 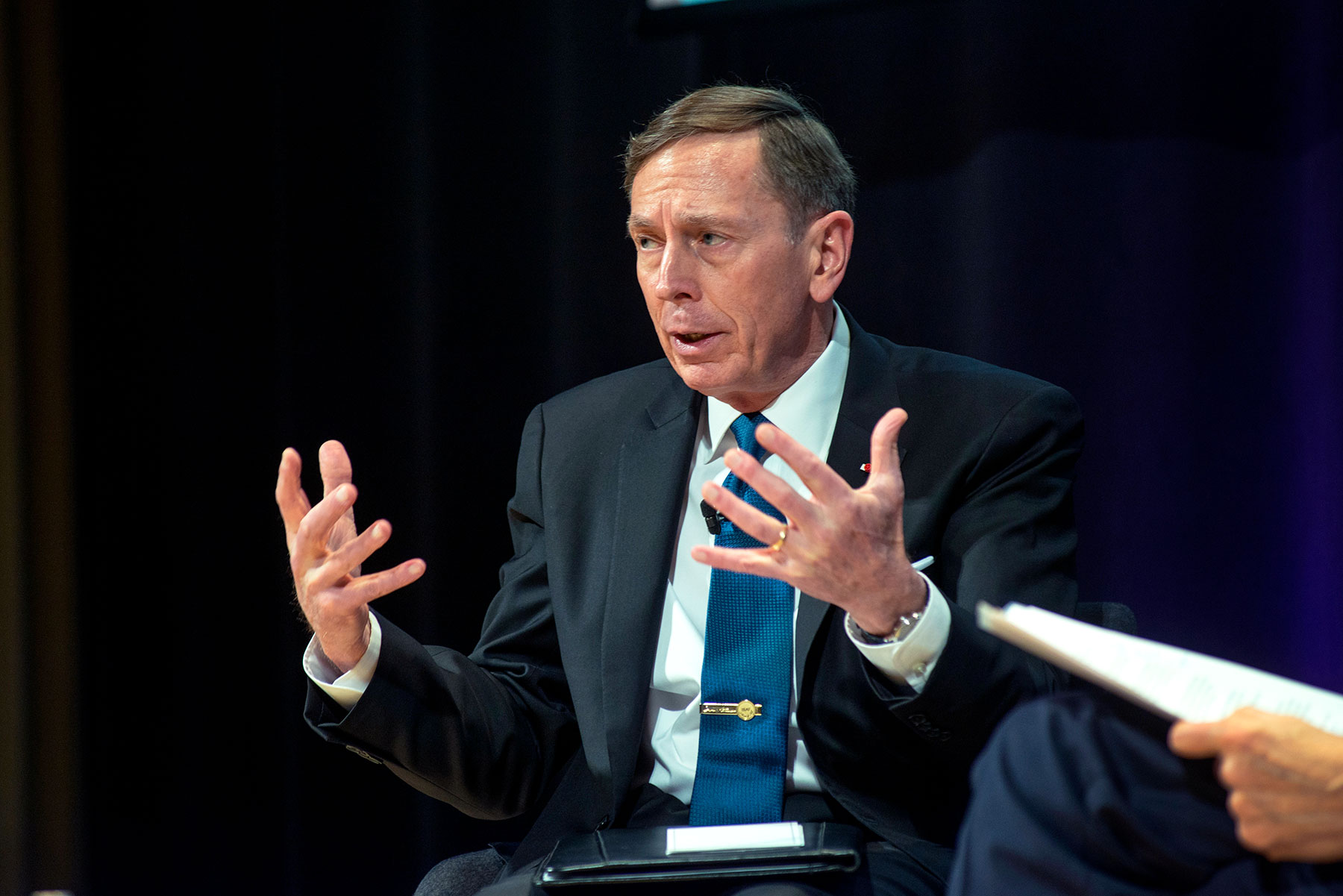 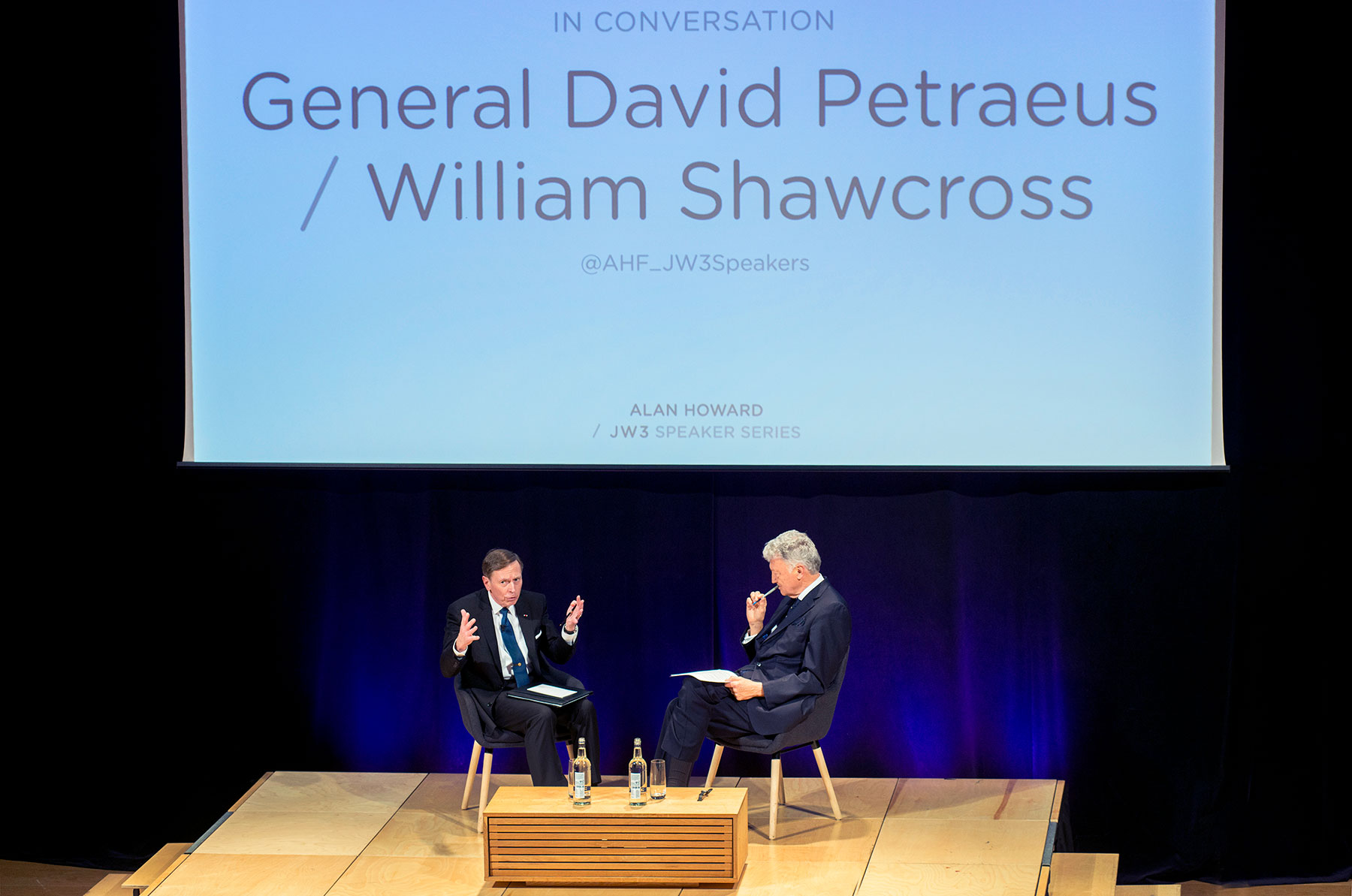 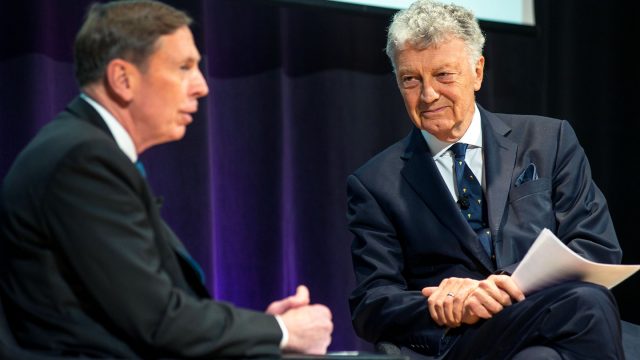 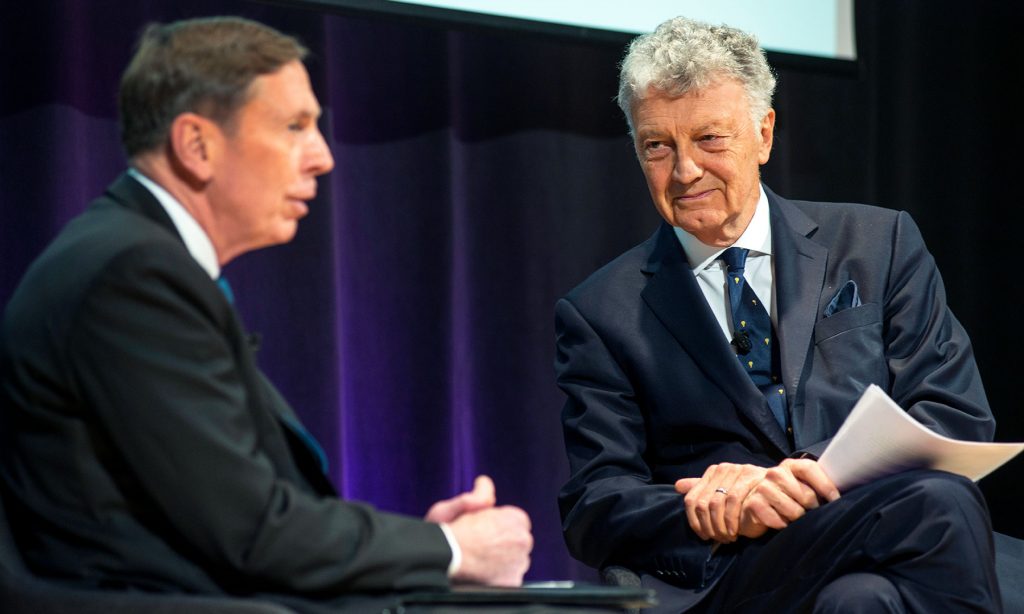 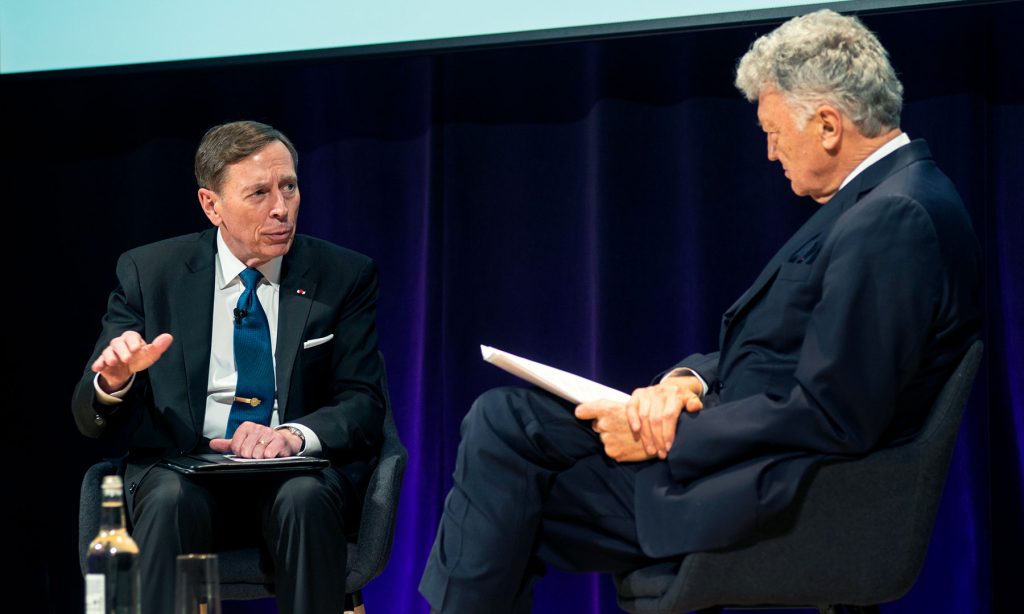 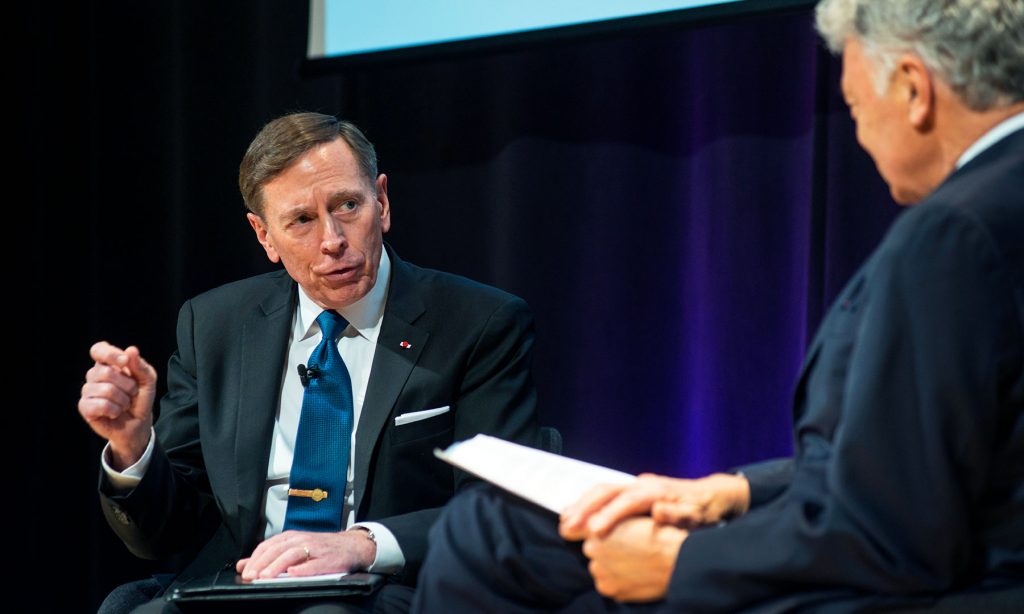 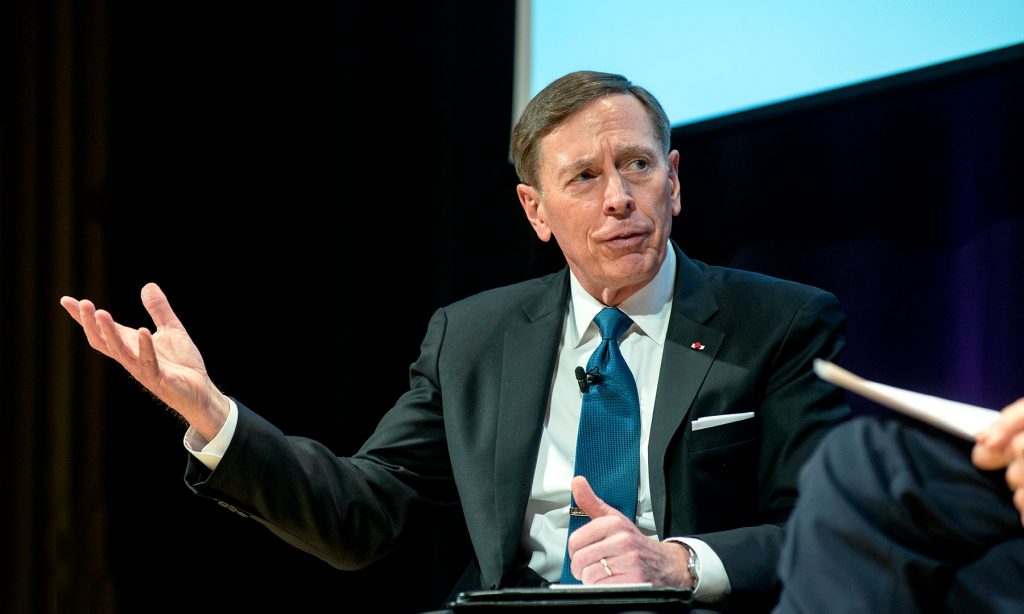 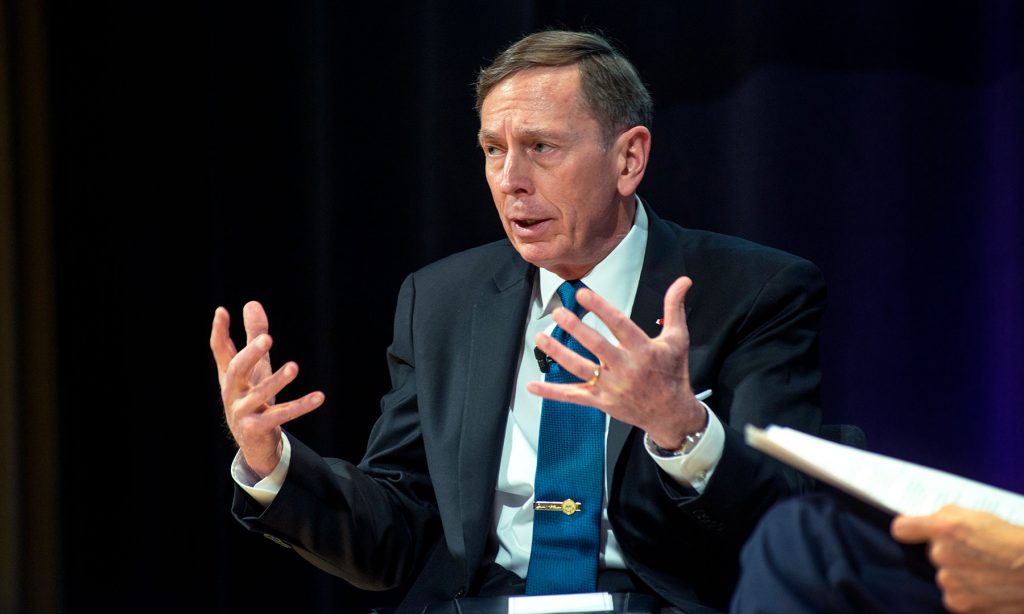 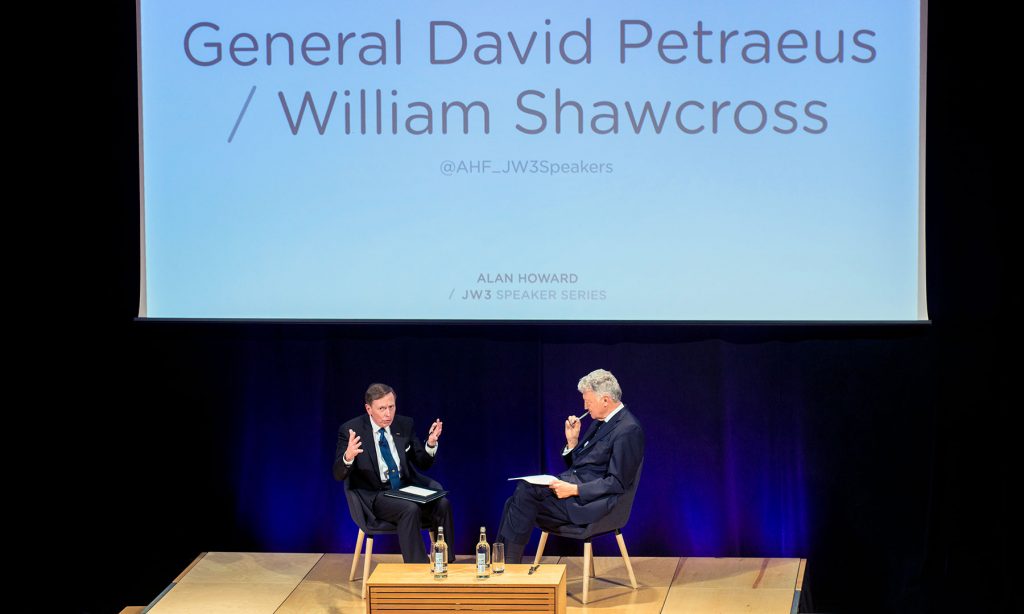 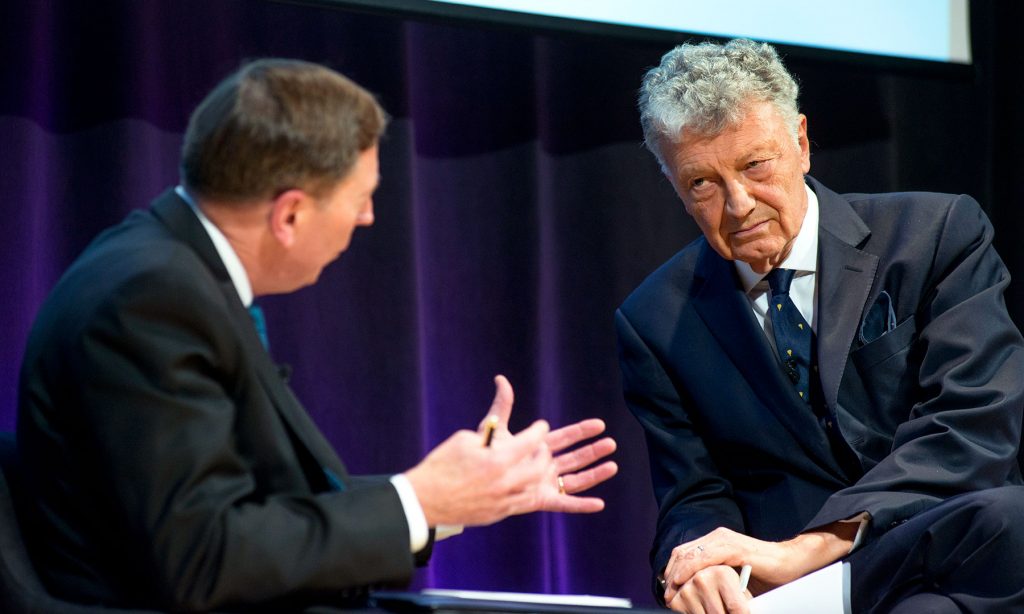 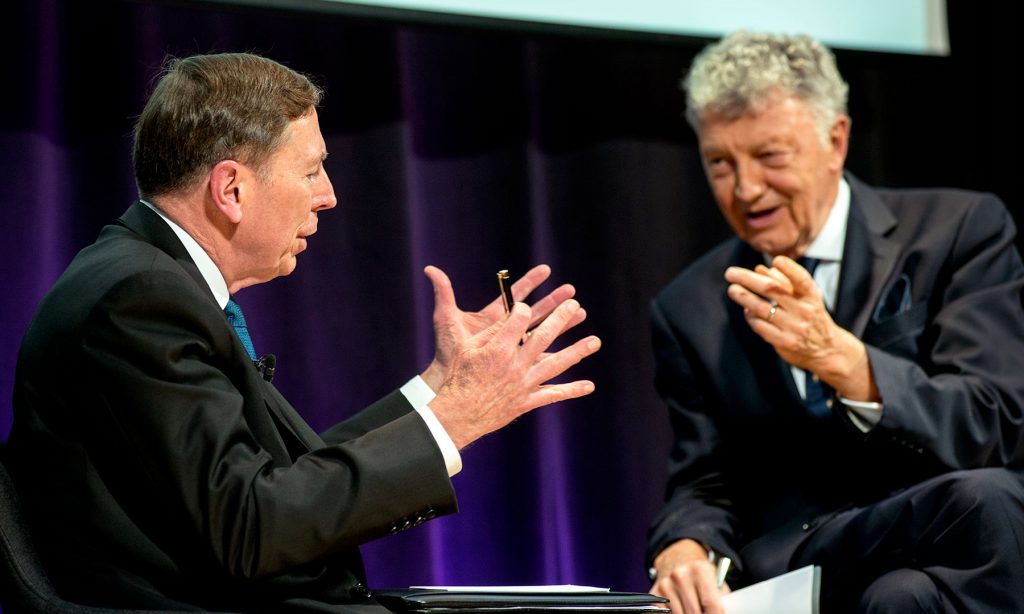 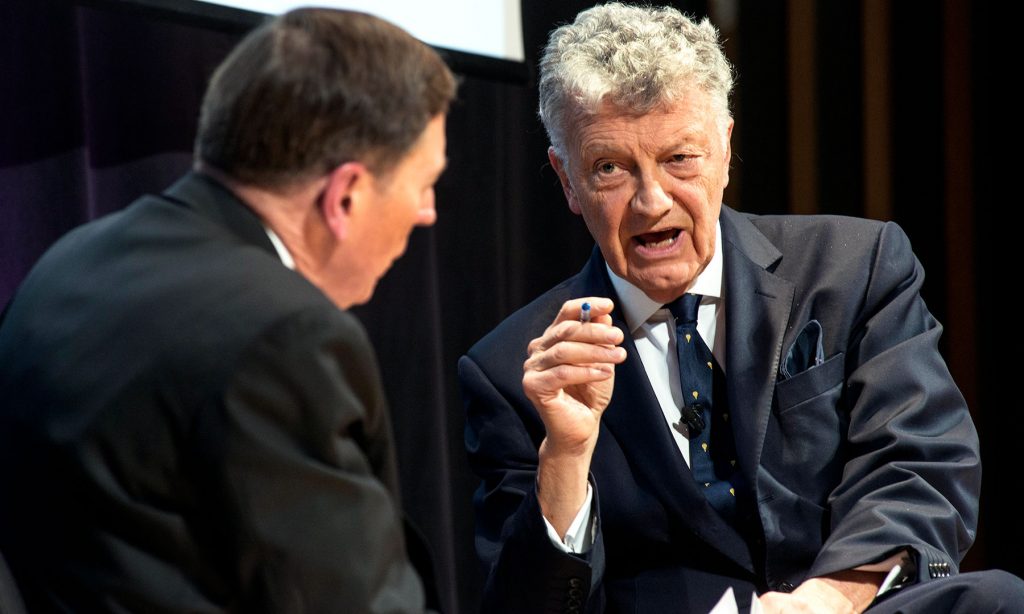 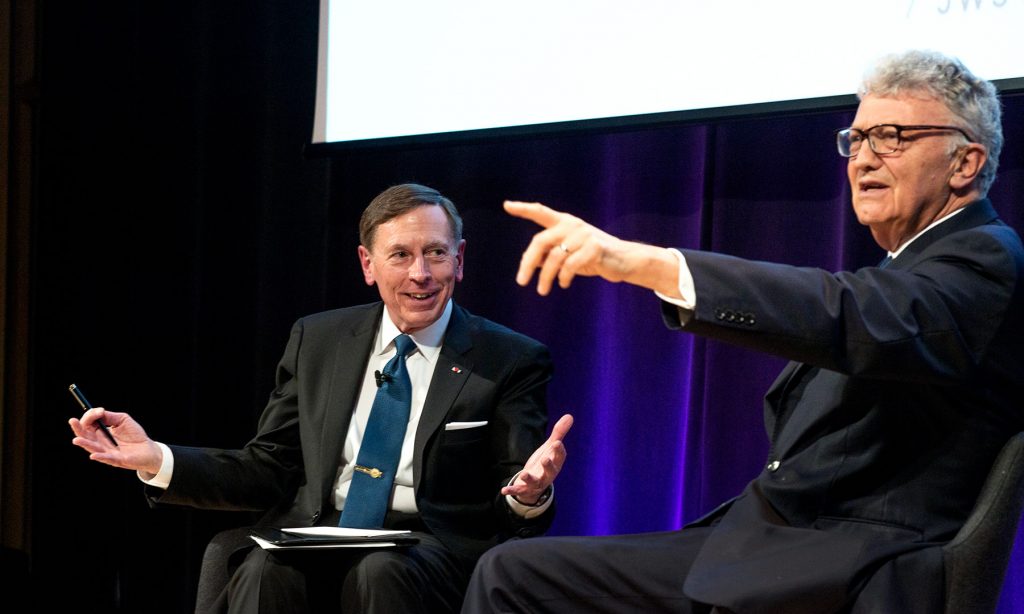 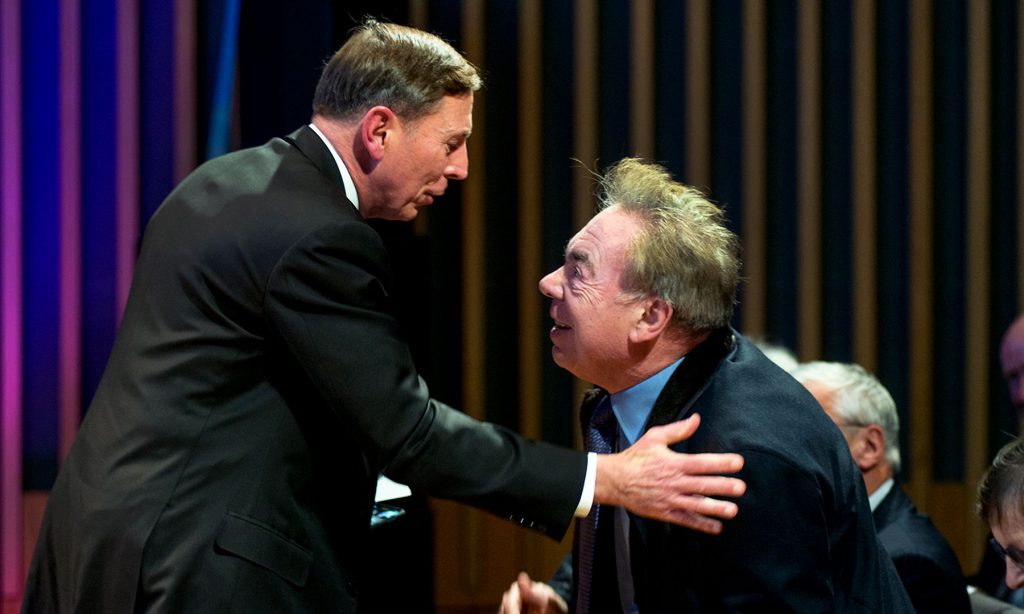 General David H. Petraeus, one of the most prominent U.S. military figures of the post-9/11 era, and former Director of the CIA, will be talking about the role of the military, and what it takes to be a leader in some of the most difficult and extraordinary situations.

Former Chair of the Charity Commission, William Shawcross CVO, is a Senior Fellow at Policy Exchange. His focus of study is extremism in public life, including anti-Semitism and anti-Muslim prejudice, as part of a new book project he is working on.