When Sunset Boulevard joined School Of Rock, Cats and The Phantom Of The Opera on Broadway in February 2017, Andrew Lloyd Webber became the only person to equal the record set in 1953 by Rodgers and Hammerstein with four Broadway shows running concurrently.

Other musicals he has composed include Aspects Of Love, Joseph and the Amazing Technicolor Dreamcoat, Jesus Christ Superstar, Evita, Love Never Dies and School of Rock.  His latest musical, a very new take on Cinderella is planned to preview on Broadway in 2020.

His production of School Of Rock was the first British musical to have world premiered on Broadway.   He has co-produced his own shows including Cats and The Phantom Of The Opera and his credits as a solo producer include groundbreaking Bombay Dreams, which introduced the double Oscar winning Bollywood composer AR Rahman to the Western stage, the Olivier Award Winning Daisy Pulls It Off and La Bete, the record breaking London Palladium production of The Sound Of Music and The Wizard of Oz.

He owns seven West End Theatres including the Theatre Royal Drury Lane, the London Palladium and The Other Palace, which provides a unique London home for new musicals in development.

Every penny of his theatres profits is invested back into the buildings.

He is passionate about the importance of music in education and the Andrew Lloyd Webber Foundation has become one of Britain’s leading charities supporting the arts and music.

Lloyd Webber is one of an elite group of artists to have achieved EGOT status by receiving an Emmy, four Grammys including Best Contemporary Classical Composition for Requiem, his setting of the Latin Requiem mass, an Oscar and eight Tony Awards including the 2018 Special Tony for Lifetime Achievement in the Theatre.   Additionally he has been honoured with seven Oliviers, a Golden Globe, the Praemium Imperiale, the Richard Rodgers Award for Excellence in Musical Theatre, a BASCA Fellowship, and the Kennedy Center Honor.

He was knighted in 1992 and created a life peer in 1997. His autobiography Unmasked was published by HarperCollins in March 2018. 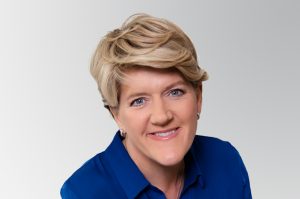 Clare Balding is one of Britain's leading broadcasters. She is also a best-selling and award-winning author of five books and an ardent campaigner for better coverage of women’s sport.