This week at JW3, former United States Permanent Representative to the United Nations, Nikki Haley, sat down with Charles Moore, Consulting Editor of The Telegraph Group, to discuss her distinguished career at the highest levels of government and the poignant moments that stood out to her.

Reflecting on her modest beginnings as the daughter of Indian immigrants in a predominantly white town in South Carolina, Nikki discussed how being bullied for points of difference on the playground led her to continually search out similarities with people. In her role representing the United States at the UN this proved particularly useful, as she often found herself in a room full of people who believed they had more to disagree on than agree on. Nikki explained how a day in the UN required “putting on body armour every day, as you know you are going to fight, you just don’t know which country.”

Charles Moore, who is famed for writing the biographies of Margaret Thatcher, was keen to discuss the concept of being a “woman in a man’s world” – something that impacted Thatcher’s life tremendously. Nikki, who expressed her admiration for Thatcher, explained how she refused to let being a young, non-white woman in politics define her. This, to Nikki, is a crucial difference between the Republican and Democrat parties – within the Republican party women are involved with things considered to be outside of traditional “women’s issues”, such as foreign policy and national security. Nikki explains how the Republican party is becoming increasingly diverse because “people don’t want to be labelled, they don’t want you to talk about what colour you are, they don’t want you talk about what gender they are, they want you to talk about what you are going to do.” There is a clear rejection of identity politics, Nikki explains.

Discussing her unique role within the Trump Administration, Nikki explains how, whilst there was never a dull moment, she always felt respected and listened to. An anecdote around President Trump’s first UN speech – where he labels Kim Jong-un ‘Little Rocket Man’ – showed that Trump was a dominant force, and that Nikki did not try to change him but rather attempted to guide him.

Turning to discuss the situation in Ukraine, Nikki reflects on her first speech at the UN which, coincidentally, was in defence of Ukraine. Sharing her views, Nikki criticised the West for the many times they acted too softly towards Russia, citing the poisonings of the Skripals as a missed opportunity to come down hard on Russia. Nikki asked, “when will we learn the lesson that when dictators tell us they are going to do something, they will do it?” In her opinion, now is the time to get tougher not softer, and explains how she would love to see the UK and the US shoulder to shoulder leading the West. She assertd that this is a war we have to win.

“When will we learn the lesson that when dictators tell us they are going to do something, they will do it? Now is the time to get tougher not softer.”

Through her admiration for Ukraine, their patriotism and their fight for freedom, Nikki highlights how much of this the USA has lost in recent years. Once a place founded on these values, Nikki describes a distracted America – a country in the midst of culture wars, whose terrible handling of the withdrawal from Afghanistan left them less respected on the global stage. Although Nikki explains “America has an amazing ability to self-correct, it will just take hitting rock bottom.”

Editor of the Evening Standard, and former Chancellor of the Exchequer, George Osborne, will be in conversation with Daniel Finkelstein, the Associate Editor, Columnist and Leader Writer for The Times. 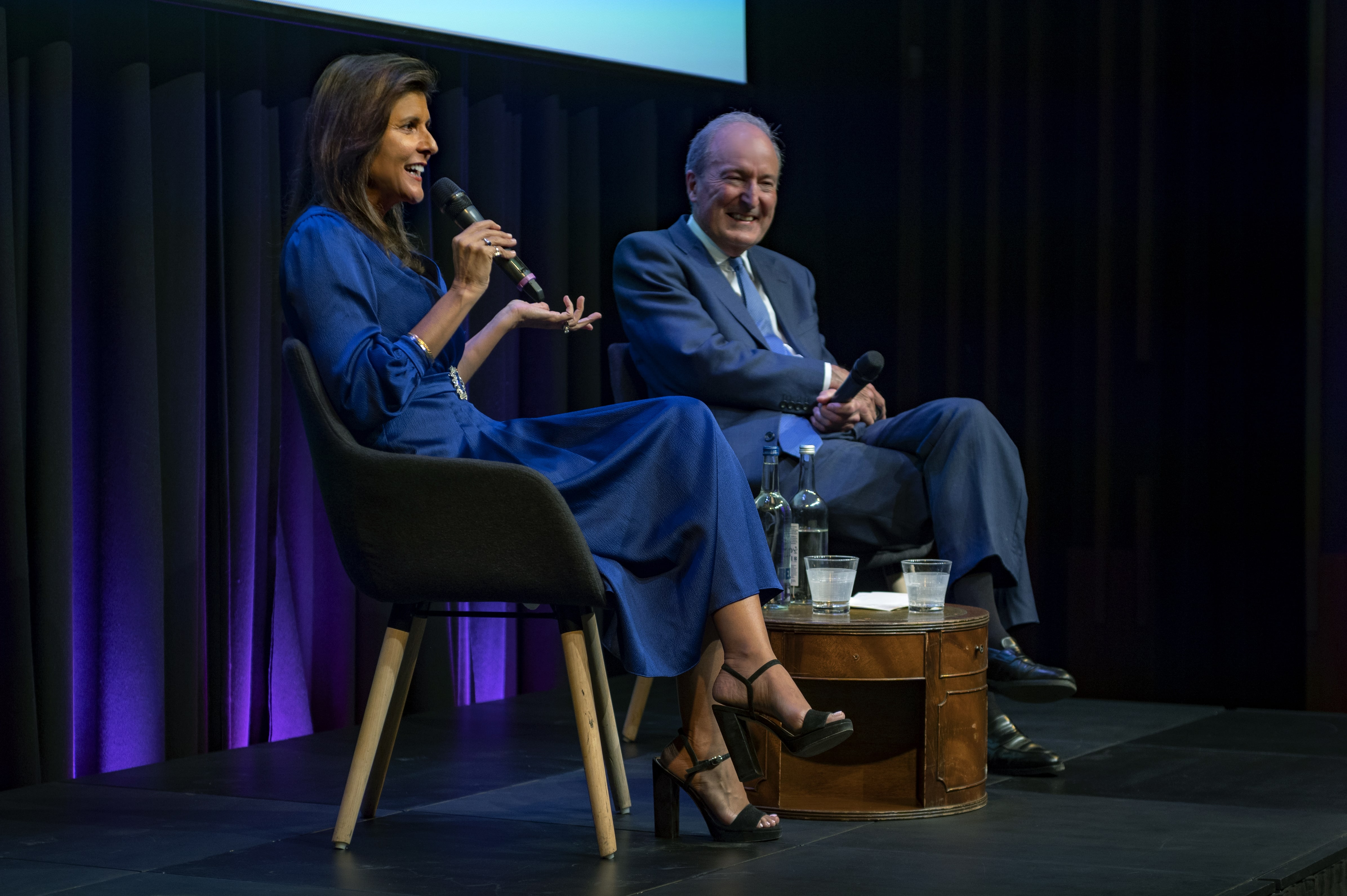 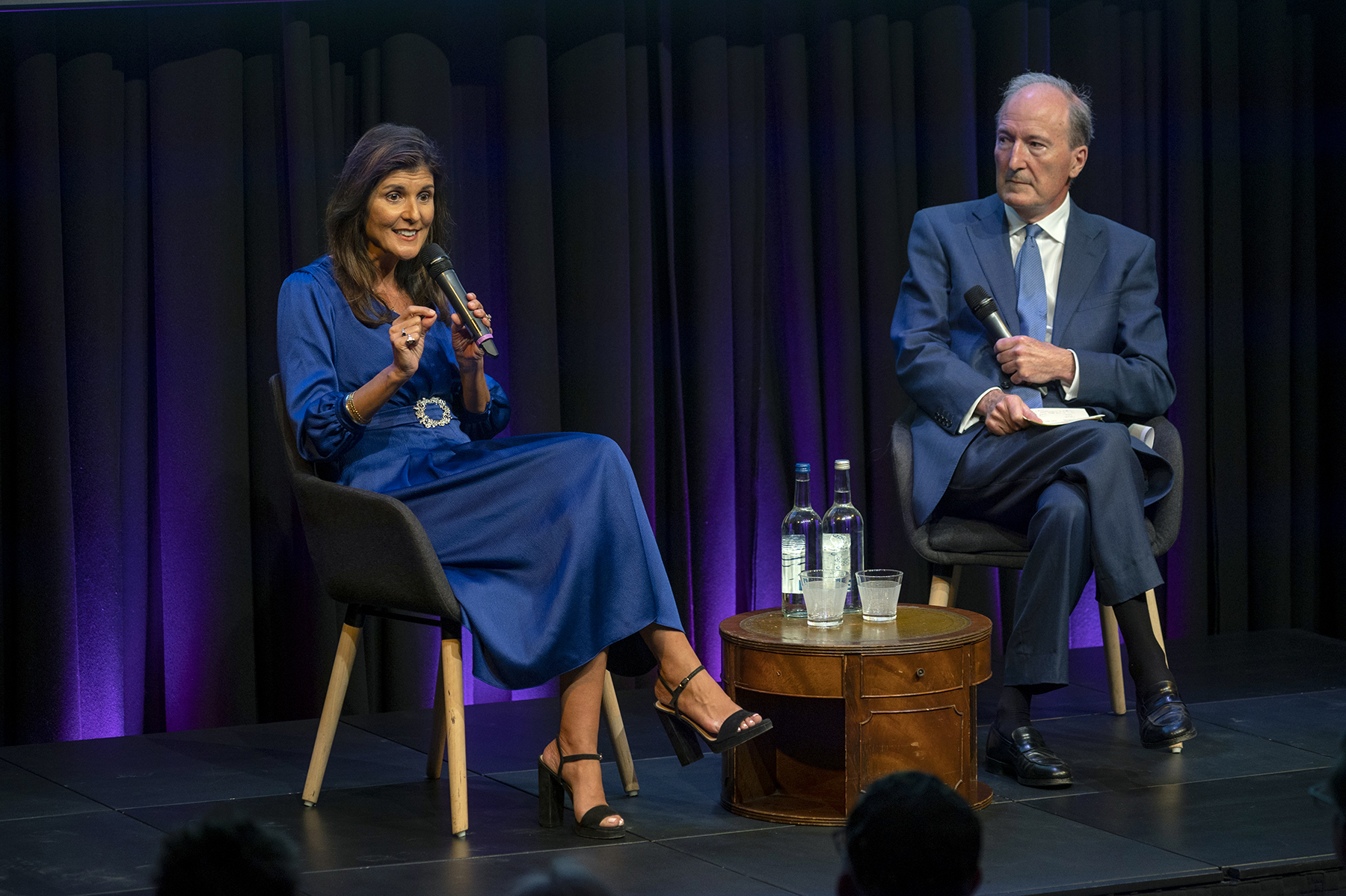 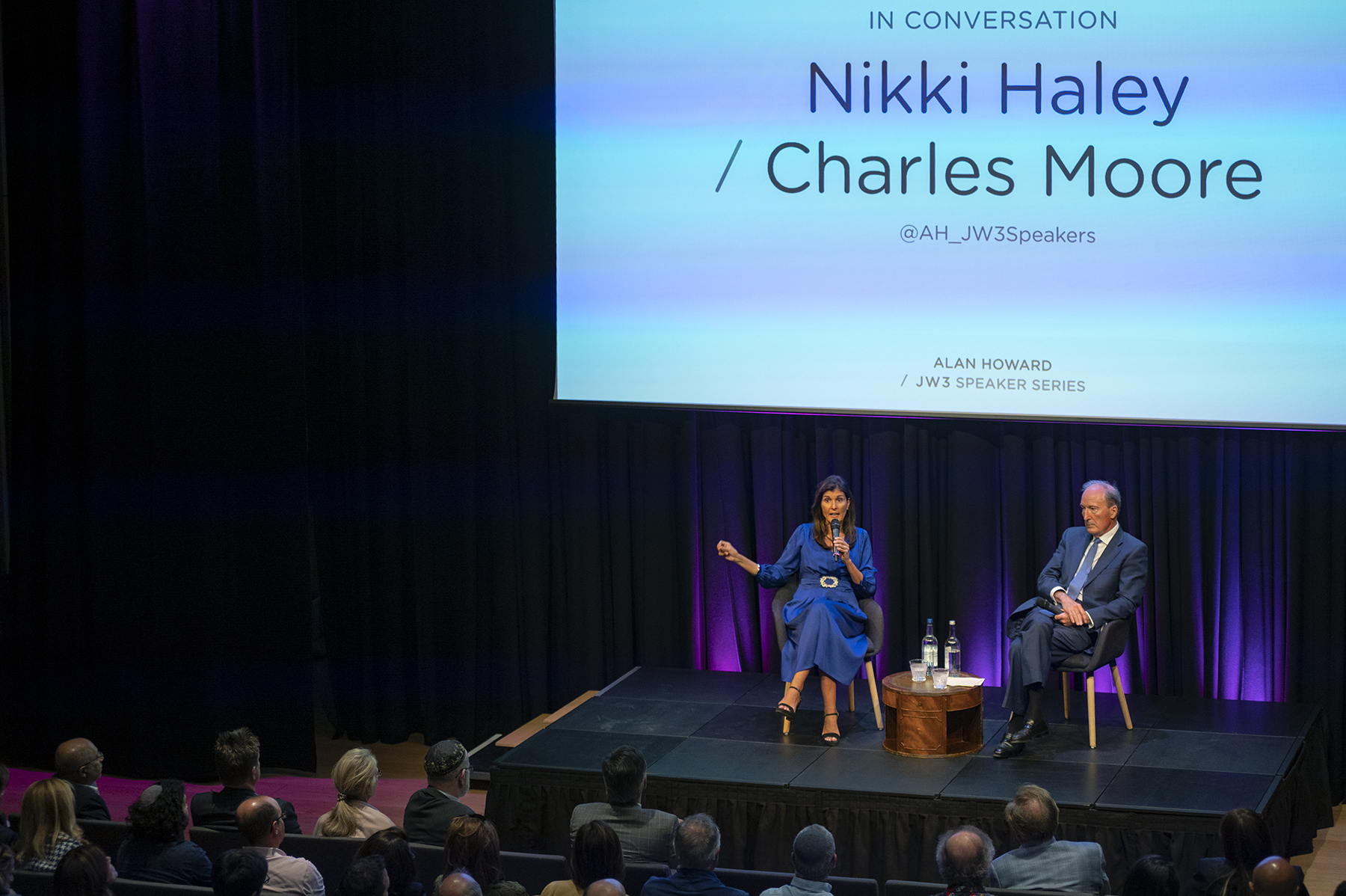 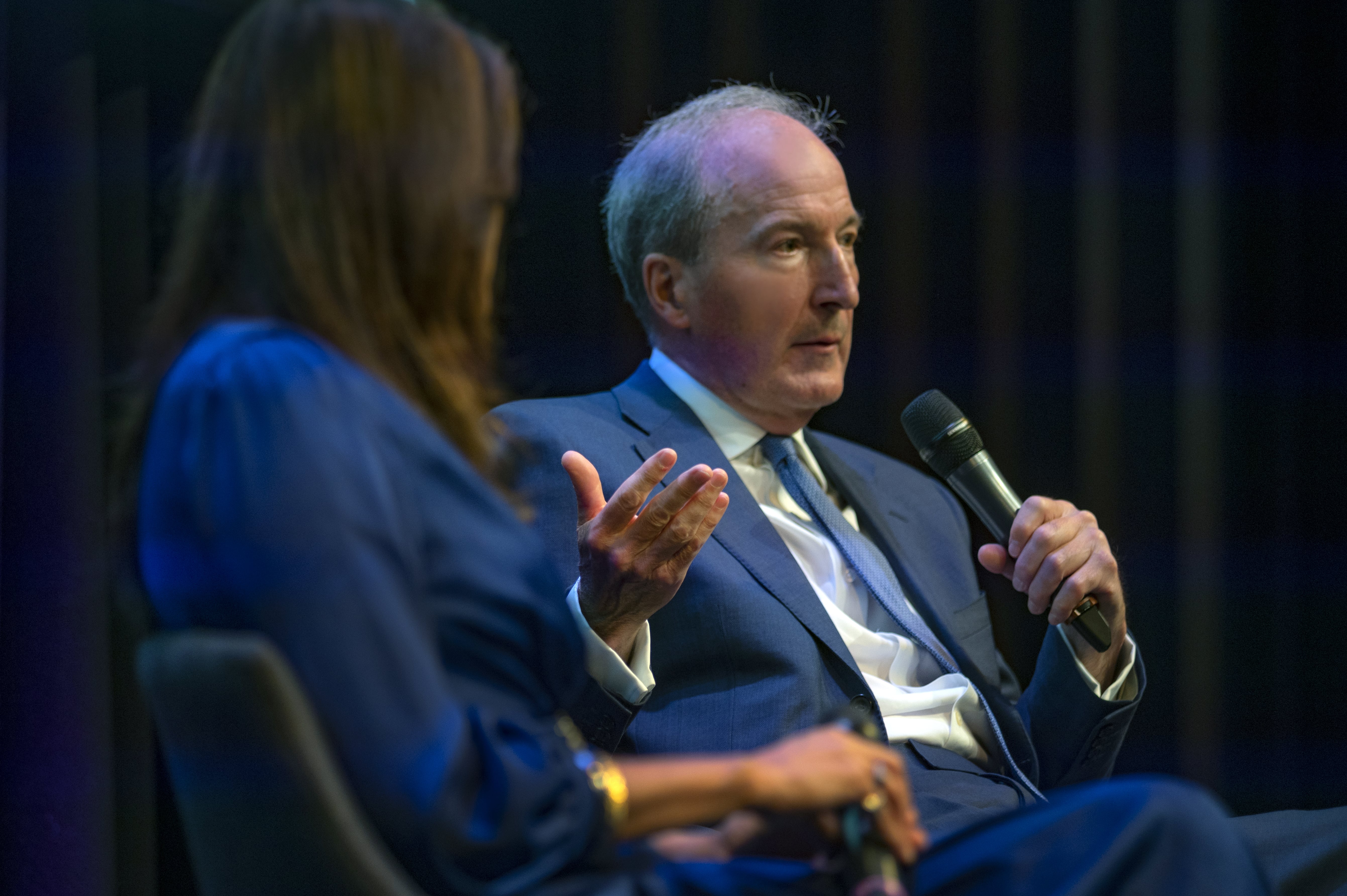 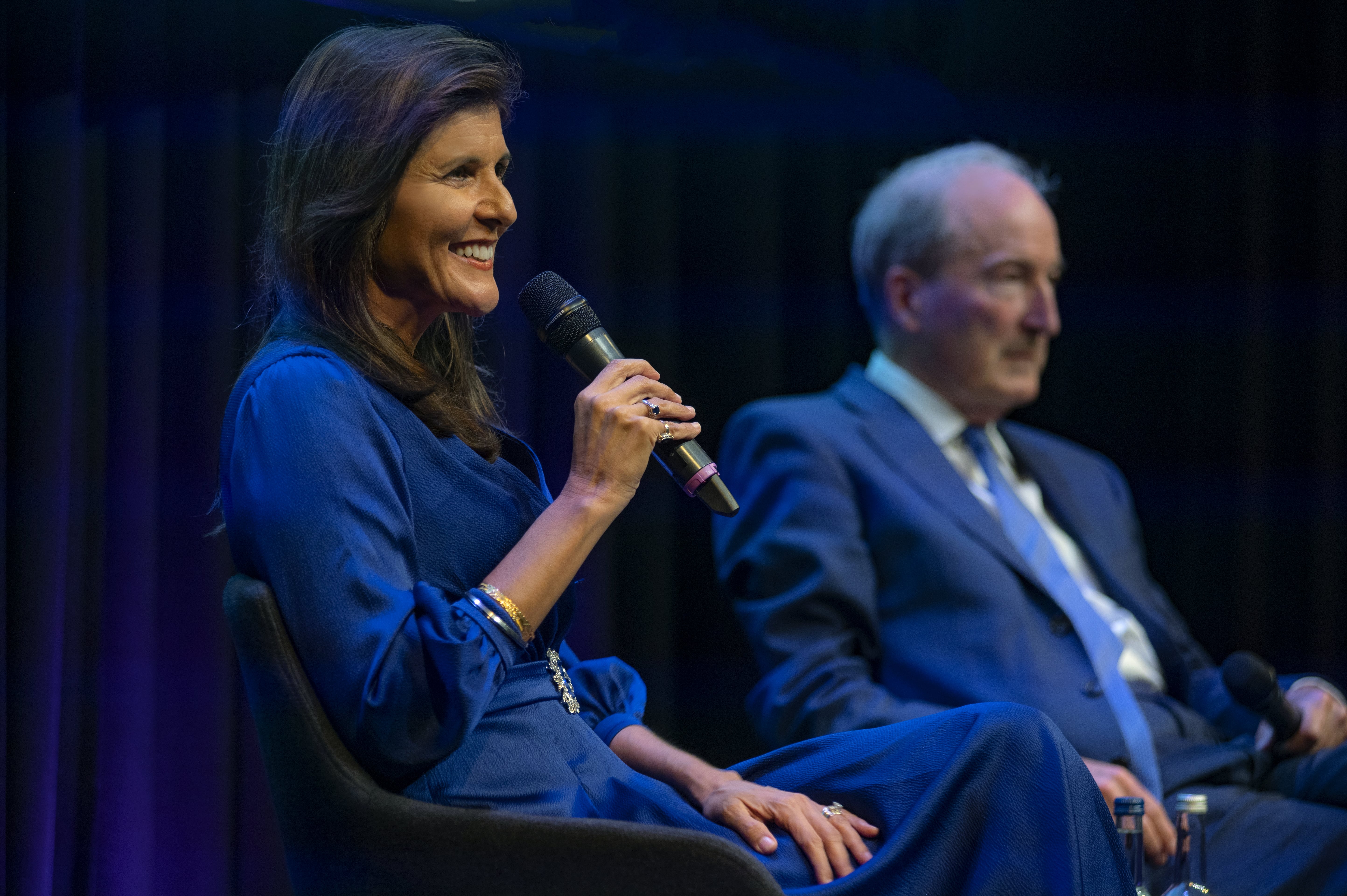 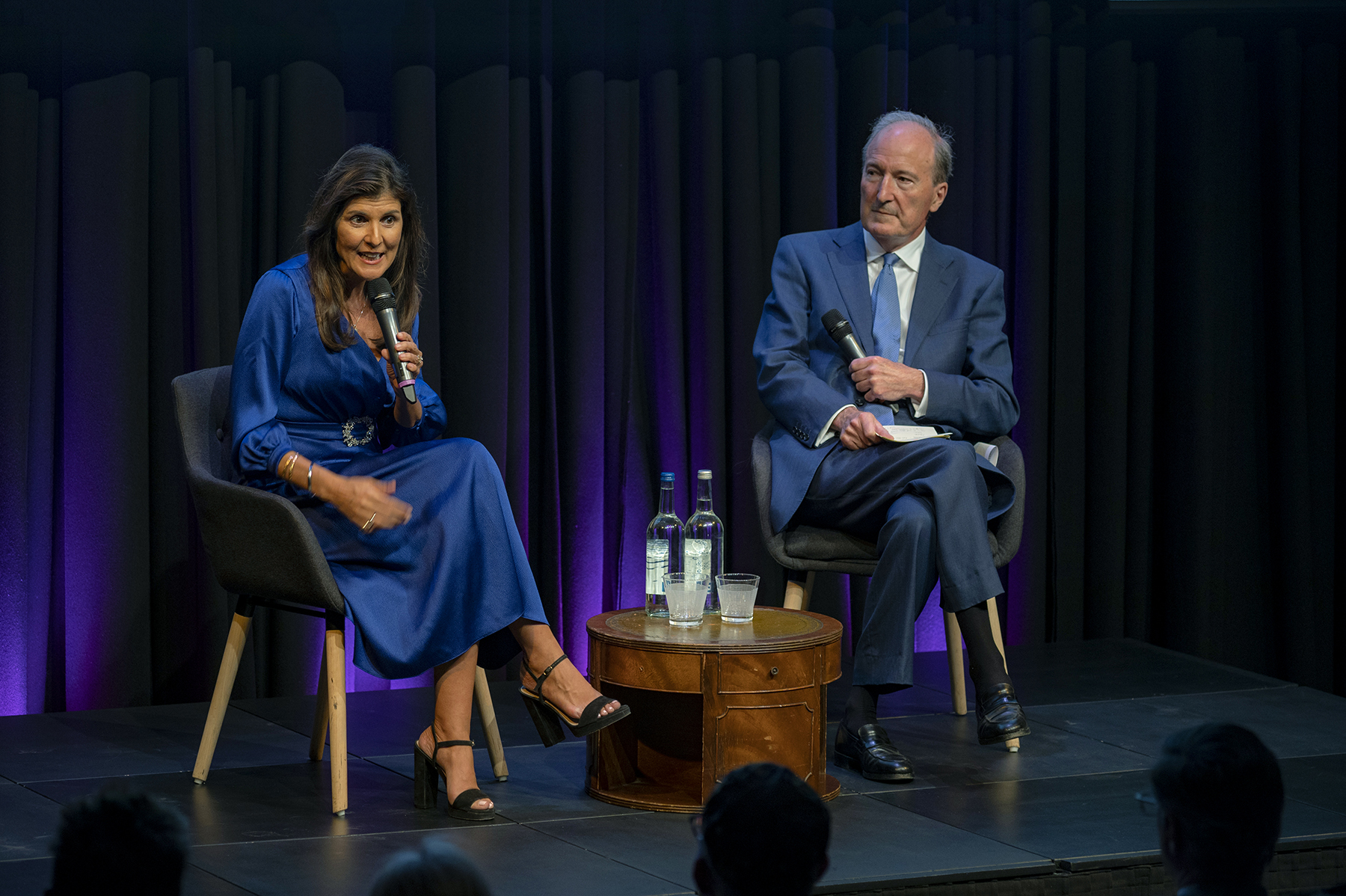 The war in Ukraine | Nikki Haley

The perception of women in politics | Nikki Haley

Nikki Haley on diversity within the Republican party 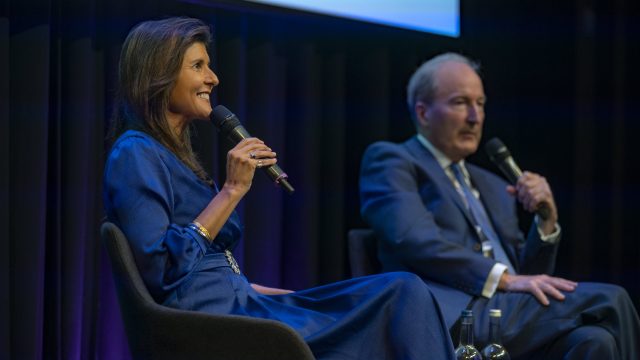 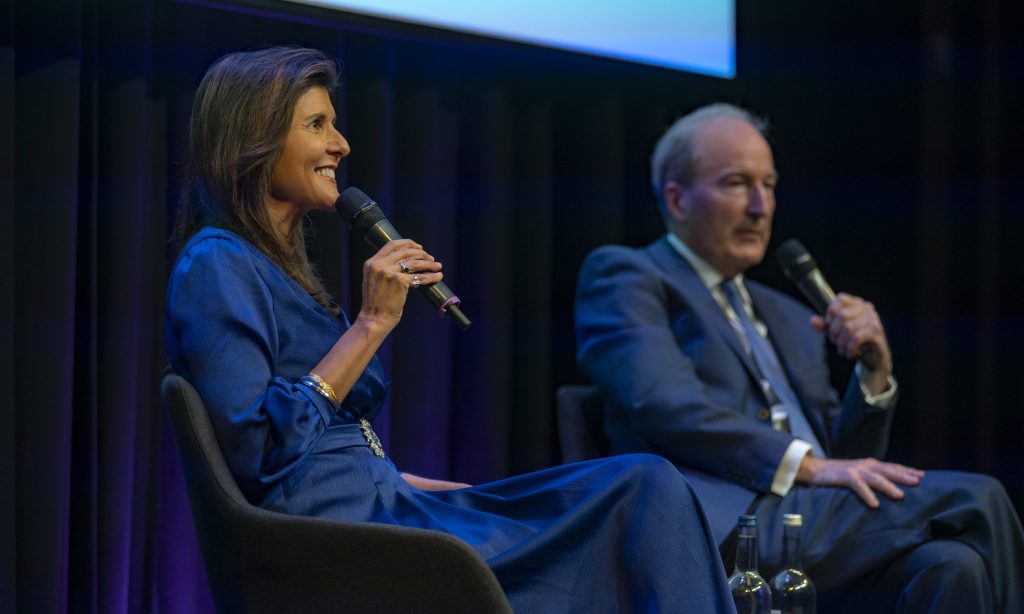 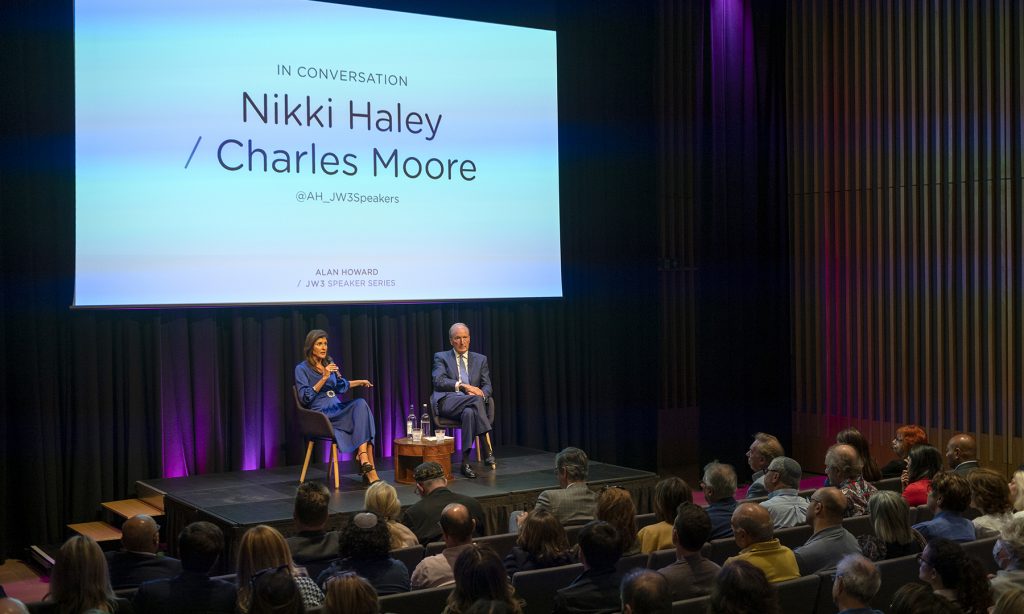 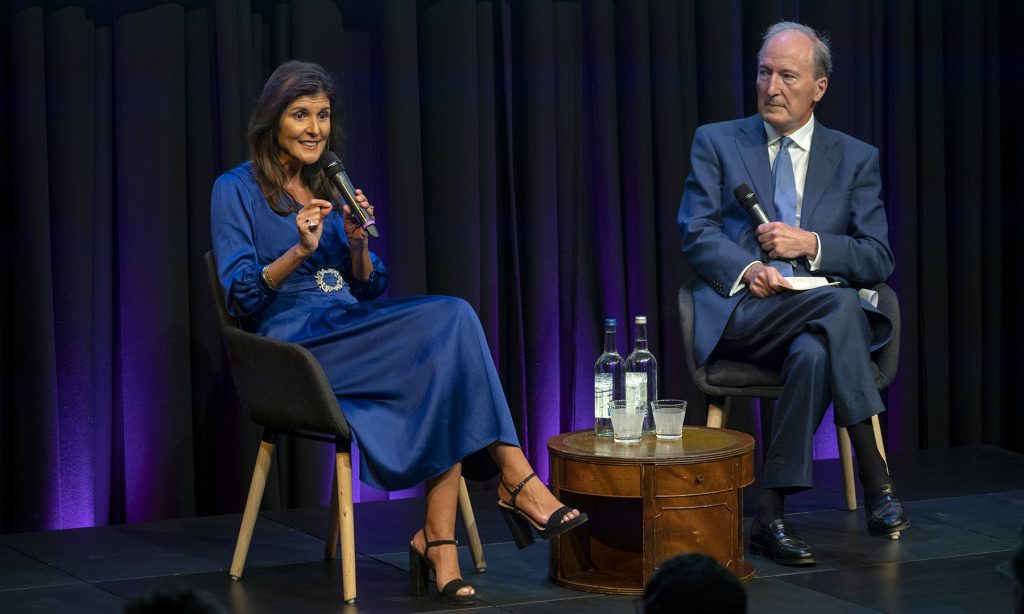 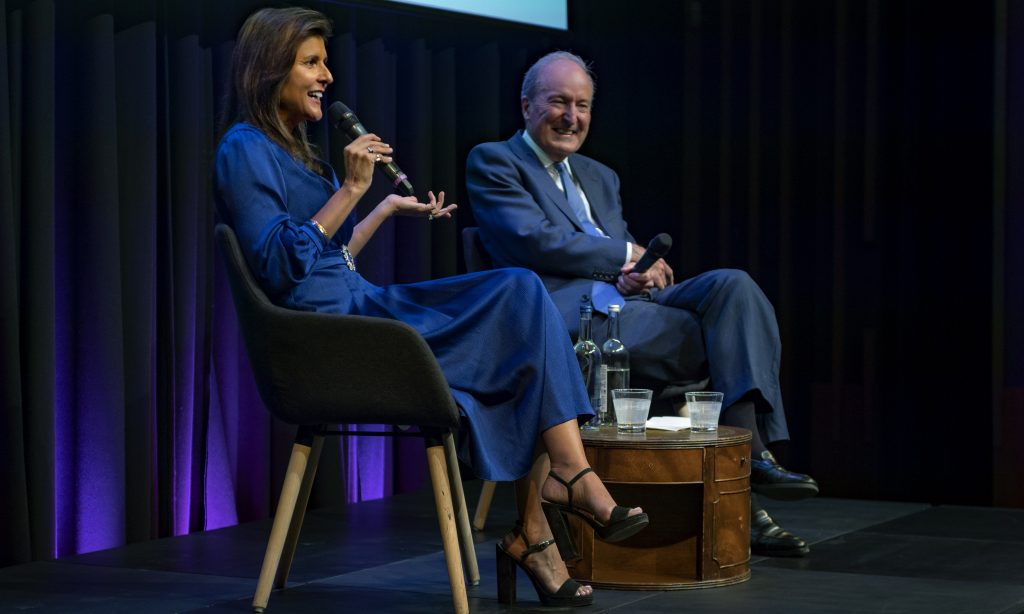 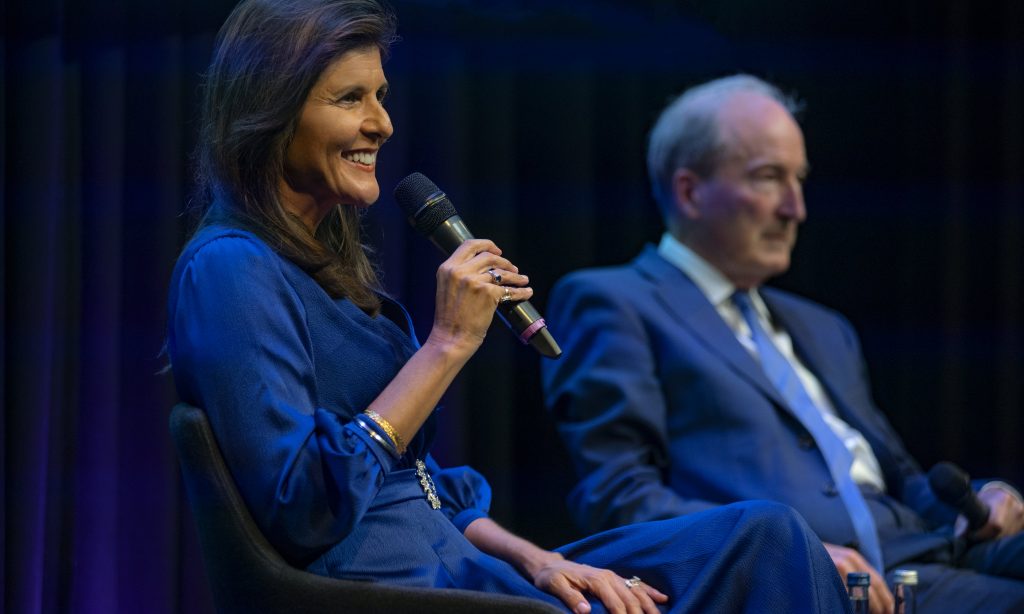 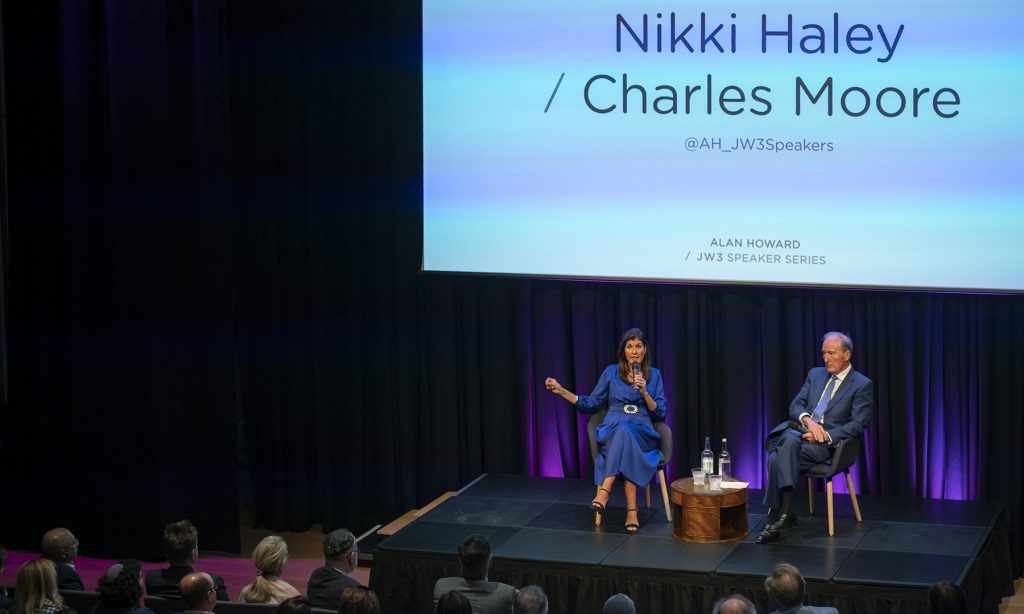 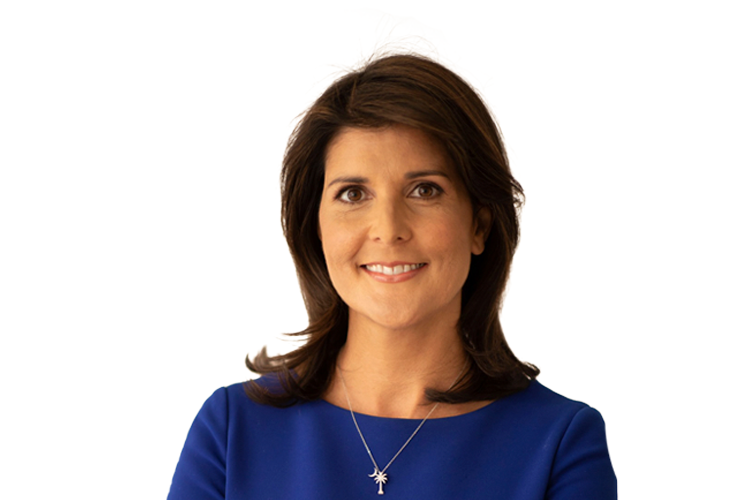 Nikki Haley is the former United States Permanent Representative to the United Nations. She served as a member of President Donald Trump's Cabinet and the National Security Council. 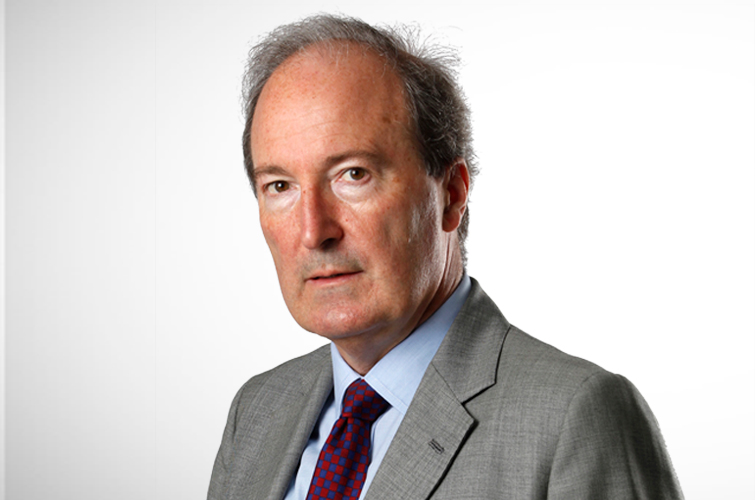 Charles Moore, Baron Moore of Etchingham, is a prominent journalist and author. Charles has been the Consulting Editor of The Telegraph Group since 2004, and is best known for his three-part biography on Margret Thatcher, as well as his work as Chairman of the London-based think-tank, Policy Exchange.